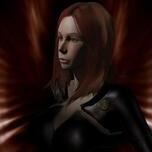 By Ruis ElderStar, September 15 in Warp To Me Local